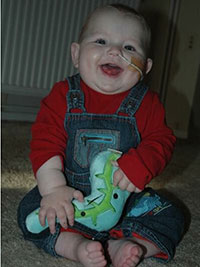 The pancreas is a small organ found near the stomach that has two main roles in the body:

In hyperinsulinism the endocrine function, specifically the beta-cells are affected.

In the focal form of the disease the affected cells are located together in a cluster.  This focus is generally spherical between 2-10mm but can be much bigger or even have an “octopus” shape.  If the focus is removed this should cure the hyperinsulinism.

In the diffuse form all the beta cells in the pancreas are affected.  Therefore treatment aims to stop all of these cells producing too much insulin.  This is done through medication.  If this fails then doctors may decide to remove most of the pancreas. However this does not remove all the beta cells and the hyperinsulinism may persist.