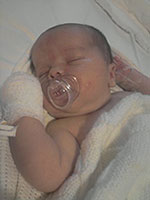 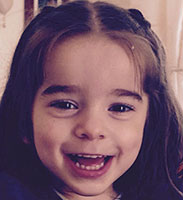 At 6 days old Alliza-Lily fell blue & lifeless at home, with laboured breathing and a vacant stare. Emergency Services were called and a paramedic in a fast response vehicle arrived within 4 minutes.  He called ambulance backup immediately.  A blood sugar test was taken which was unreadable and a shot of glucogon was given.  Even after that, Alliza's blood sugar was only in the 1's.

When we arrived at A&E, a team of paediatric doctors were ready waiting.  She had numerous tests and the doctors liaised with Great Ormond Street.  After 6 days in Special Care, we were transferred to GOSH for 4 weeks where it was confirmed that Alliza-Lily has Hyperinsulinism.  She is Diazoxide responsive and is a happy, sociable child who loves her horse riding and passed her Grade 1 certificate as well as completing her 1km and 2km endurance tests within a couple of months of starting riding.

Our story was covered by BBC Real Rescues and was in our local newspaper.  The links are below: