When you imagine pregnancy, birth and a newborn baby you always imagine those beautiful pictures you see in magazines or the stories you are told in your NCT lessons.  However my experience did not live up to this hype.  After weeks of increased swelling and polyhydramnious I was induced at 39 weeks and Charlie was born weighing 9lb 10oz (I was later to learn that many hyperinsulinism babies are larger than normal).  He fed normally and fell asleep.  Twelve hours later he was still asleep and unable to wake him I called the midwives. 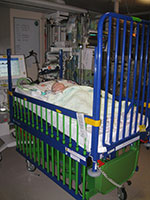 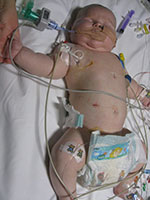 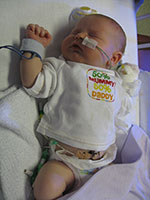 The next 24 hours passed in a blur.  Charlie’s blood sugars were unreadable.  The midwives had never seen anything like it and, not trusting their machines, tried twice more before force feeding him and calling doctors.  Charlie was rushed to SCBU and put on a 10% glucose iv infusion.  This still failed to raise his blood sugars and eventually an umbilical line was inserted with a 30% glucose drip and his sugars stabilised.  Unfortunately Charlie remained with very low blood sugars for over 24 hours and suffered many seizures during this time.

We were very lucky at this point.  The consultant in charge of Charlie’s care had seen hyperinsulinism before (although not as severe) and contacted Dr Hussain at Great Ormond Street within 48 hours of Charlie’s birth.  Although a bed was not available for Charlie until he was 10 days old he was under the care of the GOSH team from these very early days.  I cannot recommend enough how important it is to get support from a tertiary centre (GOSH or Manchester) as soon as diagnosis is made.

After Charlie’s transfer to GOSH he had a Hickman line inserted and his diagnostic care  included an unsuccessful trial of diazoxide.  After this it was clear that he needed a PET scan and the arrangements were made for him to travel to Berlin.  We needed to get him an emergency passport which involved a day spent at UK passport office in London.  The trip to Berlin involved a very early Monday morning flight for myself and Charlie.  My husband had to follow on an EasyJet flight and joined us later in the day.  Unfortunately Charlie’s line became tangled at Heathrow and his doctor, nurse and myself had to spend 20 minutes on the runway fighting to get his sugars back up to normal levels. Unfortunately Charlie suffered further seizures at this time.  This happened again in the ambulance in Berlin due to the severity of his HI. 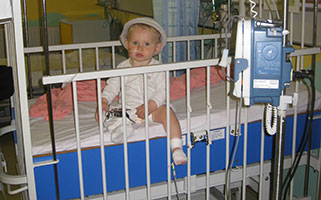 Berlin was an experience!  We have heard many horror stories from other parents - the “foreign” food, the communication problems, the unusual circumstances.  To us Berlin was amazing!!  We were seasoned travellers and enjoyed the new experience and toured the city.  The team in Berlin were fantastic and we have had contact with Dr Oliver Blankenstein since and regard him one of the best HI doctors in the world.  But most of all this is where we found out Charlie had focal hyperinsulinism.  Charlie could be cured! 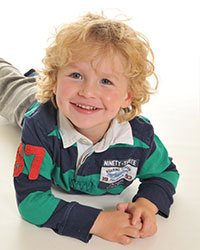 Upon Charlie’s return he went into surgery and had 35% of his pancreas removed.  This surgery was meant to cure him but failed.  Not only were his sugar issues unchanged but he suffered complications in surgery and ended up in PICU.  He was literally now fighting for his life and our hopes of getting him home started  to fade.

As he recovered it was evident that Charlie would need another PET scan and the threat of another trip to Germany was becoming more real.  However there had been a lot of communication behind the scenes.  Charlie’s Great Uncle, David Hawkes, was the Director of Medical Imaging at UCL and his new relationship with the GOSH Hyperinsulinism team allowed a source of the correct isotope to be found and Charlie became the first child to have a 15F DOPA PET scan in the UK.

The focal lesion was more precisely located and in December Charlie underwent a 2nd surgery and the focus was removed.  It was amazing.  Charlie’s sugar levels stabilised instantaneously, his Hickman line was removed within days and he came home on 17th December just before his sister’s 2nd birthday.

After such a traumatic start we hoped that our troubles were over once we got Charlie home.  Unfortunately he had lost his suck reflex during his time on TPN and he also had severe reflux.  Charlie was 100% tube fed until 10 months old and we continued to use an ng tube on occasion until 18 months.  Charlie didn’t talk until 3 ½ years old and suffered developmental delay.  We were told he had brain damage caused by the earlier hypoglycaemic episodes and would need specialist schooling.

So where are we now? 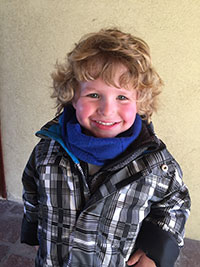 At 4 ½ years Charlie still has some issues with maintaining blood sugars when poorly but has proved everyone wrong socially.  His speech is coming on leaps and bounds.  He is starting to read and he is able to count and do basic mathematical equations.  He has friends and enjoys football, swimming, skiing and ballet.  Best of all he is due to start his sister’s mainstream school in September and has been discharged by his educational psychologist.  He may still have hurdles in the future but Charlie now has a bright future.  He is an amazing little boy and a testament to the team at Great Ormond Street.

Charlie’s story in pictures can be viewed on the Great Ormond Street website:

His story is also mentioned in the GOSH Highlights report for 2013/14: